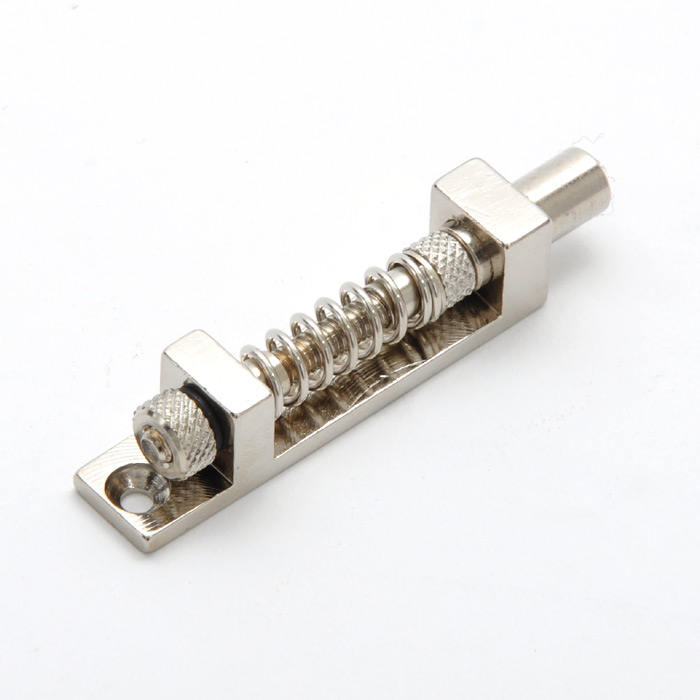 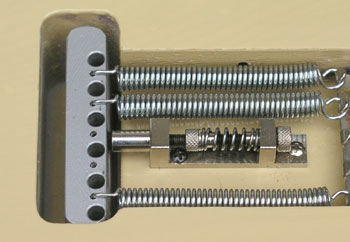 One of our international customers wrote this wonderful description (thank you, Keith):

1. The spring of the Black Box is pre-loaded (compressed), so that it extends the plunger from the housing, as far as the position of its adjustable stop allows.  A force exceeding this pre-load will be required, to press the plunger into the housing.

3. The guitar tremolo springs should be adjusted so that when the trem block is at its zero position,  the moment which the springs exert on the tremolo bridge slightly exceeds the opposing moment, exerted by the string tension (including additional forces during any pitch-bending).
This will ensure that the tremolo block is always returned to,  and held held firmly against, the Black box plunger, after any  diving, and during pitch bending.  During these conditions, the plunger is not moved from its zero position, because the pre-loading on its spring is greater than the resultant force being exerted on the plunger by the trem block.

4.  If a string is de-tuned, or broken, then the resultant force exerted by the trem block on the plunger will increase. The plunger spring pre-load must exceed this force, in order to retain the zero position, and thus maintain pitch.

5.  Raising pitch by lifting the tremolo arm will depress the plunger. The pre-load, plus the increasing resistance of the plunger spring will make the tremolo arm feel stiffer that normal.   When the arm is released, the same spring energy will ensure that the system is returned to zero.

6.  Depressing the tremolo arm will reduce string pitch as normal, perhaps with a slight increase in stiffness, due to the increased tension in the trem springs. On release of the tremolo arm, (as mentioned above) the increased trem spring tension ensures that the trem block is firmly brought back to the zero position against the Black Box piston.